When I took on the second plot on Ranmore Allotments I had no hesitation in dedicating it entirely to fruit. This first year has allowed those young bushes to grow strong roots and I was not concerned that any fruit that did form was taken by birds long before it was ripe. Next year all the soft fruit will need netting. I knew this when I started, but how and what with, and at what cost, kind of got lost in a haze of enthusiasm. Now it hits me with a punch to the wallet that this is going to be expensive to the point that the red, white and black currants as well as the gooseberries will be the most deliciously expensive fruit that I will ever enjoy.
Allotment ethos is one of make do and mend, and recycling, which by and large means finding bits and bobs and odds and ends in skips ready for landfill. Great for the odd raised bed or patch work shed but when it comes to large numbers of long uniform timber then we wait in the hope of something turning up. And turn up it did when the house at the bottom of our road decided to have a loft extension. First a hard hat was thrown over the building and the old roof completely removed with (joy oh joy) the rafters stacked in the drive. Guess who was first to be knocking on the door only to be told I'll let you know. It seems that there were several interested parties but he did get back to me with a 'you better get in quick' - it seems with the popularity of wood stoves it was wanted for fuel.
It has turned out to be a happy and unexpected discovery (serendipity) and was quickly cut to size, treated, transported and transformed to make the bulk of the cages. Still a bit to do but who knows - something will turn up, but alas I will have to buy the netting. It is curious that despite the care I took in marking out the beds that now I'm cutting the timber every side is a different length!
Oh! I do like allotments.

Many years ago when I walked the streets of Roehampton in South London delivering the mail (in those days that was twice a day) there was a house in Westmead that had a fig growing against its south wall. It was large and I was impressed every time I saw it but as at the time I was not that interested in growing anything let along a fig it must have got stored away in that dysfunctional filing system that is my brain. It was therefore a surprise when it resurfaced on reading The British Gardener blog on figs and became a 'must do', and I had the perfect place it could go.
When we moved to Dorking 14 years ago there was growing on the south wall a winter jasmine that looked very unhappy. It hung loosely from wires obviously placed there to train it but was all stalk with not much it the way of leaves and little if anything in the way of flowers and they barely smelt of jasmine and even after the sort of pruning that shouts 'shape up or ship out' refused to improve. So it went.
In its place came a fremontodenron or California Glory which was in every sense glorious. It loved the sun and the warmth of the south wall and the pitifully poor soil it sat in and grew prodigiously, so much so that it received a severe prune each autumn or the path would have been impassable. The next year it bounced back stronger than ever and so was pruned again, and that became its downfall. California Glory is covered in fine hairs that brush off getting under cloths, up noses, and down throats, leaving you coughing and spluttering with eyes watering and heading for the shower. With our first Grandchild on his way it was clearly not a plant for him to brush against, or more likely fall in to, so it too went.
The spot lay empty for a while until we had a couple of very dry summers and the gardening pundits warned us all of the need to conserve water and plant Mediterranean style or see our gardens shrivel up. I sometimes wonder if those pundits ever look back on what they write and grimace in much the same way as a 40 something does at mullet hair styles and Duran Duran. However we were spurred into placing six water buts about the garden with one on that south wall.
I decided on a sort of rustic stand for the butt built of broken paving stone and rammed rubble down for the base but a strange thing happened, the more that was rammed in the more was needed all the while the ground rippled as if it were liquid. This was worrying, was there spring next to the house, was there a broken pipe soaking in to the foundations? The answer turned out to be geological. This part of Dorking is greensand yet sits beneath the chalk hills we can see from our windows, in fact in some of the fields its not unusual to see flint and ironstone side by side. To the east running through Riegate and Redhill, and south to Nutfield there are deposits of Fullers Earth, which was still mined at Redhill as late as 2000. Fullers Earth is a highly plastic sedimentary clay of the Lower Greensand and was used from the Medieval period to remove lanoline from wool in the fulling process, hence the name. A nice story is that in Riegate, because the mineral was valuable and anyway belonged to the Crown, householders would dig it out of their cellars to sell secretly. Some cellars were said to be so big they stretched right under the high street! 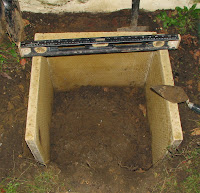 So what is all this to do with a fig I here you ask. Well, it is recommended that the roots of a fig should be contained to encourage fruiting and that gave me the opportunity to dig a big hole next to the water butt before lining the pit with paving slabs. The clay that came out was quite unlike any other part of the garden, and very fine. The planting hole was filled with spent compost and lots of grit, and around the slabs was filled with sharp sand to comply with the figs other requirements of free draining and poor soil. The fig itself is a Brown Turkey which is probably the best outdoor variety for the UK and has the RHS merit badge and if all goes well will give both interest and fruit - unless the roots escape of course!...........Now where can I put that Mulberry Tree I've always wanted. 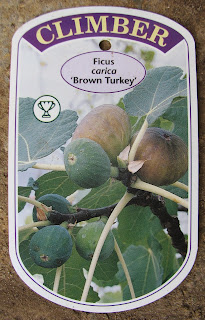