Another site bites the dust

The Barnett Wood Lane allotments have been sold to developers. Nothing new in that, but it came as a bolt from the blue for the tenants, and had them scrambling to form an association to fight their corner. The allotments, properly called 'The Barnett Wood Lane Poor Allotments', are in the north of the district at Leatherhead but still part of the Mole Valley District Council, hence my interest. It is a big site of just over 9 acres with 103 plots and was indeed even bigger until a smaller section across the lane was sold for housing a few years back. It is unfortunately next to an even bigger area of open land owed by Oxford University and the two sites make 30 acres of prime building land, enough for 500 houses!
When the rumours first surfaced 6 months ago it came across pretty much as a 'done deal' with preferred bidders etc. And when the deal was voted through the Council chamber without a single objection that belief was sadly confirmed. After all £21 million comes in handy when your cash strapped and the Government has capped your ability to raise revenue. Luckily for the allotment holders the developers will have to stump up the cash to provide a new site, although where and what the land will be like is anybody's guess. At least now they are an association they can put pressure on the developers and the council to get decent facilities such as secure fencing, water AND electricity, and maybe a community building as well. They may also like to drop the POOR label, as although on the one hand you can date the allotments to 100 years plus it also implies they are given as charity by those on high. How about Allotment and Leisure Gardens instead.
Talking about 'those on high' it makes me wonder if they have ever given a thought as to where the food they eat comes from, perhaps they don't need to. It seems that the food we eat and where we live are well and truly divorced, for example Egyptian  new potatoes grown in sand and watered by artisan wells are packed in imported Irish peat and exported to a supermarket near you, but not near enough however that you will not need to use a good drop of fossil fuel to get them!
The growth of our urban areas have for centuries squeezed food growing further away from the populations that needed the food to eat. Fulham was once famous for cabbage and turnips and was called 'the market garden of London', Chelsea had huge asparagus beds, Kensington had acres of nurseries (if your not sure where that is think of the Royal Albert Hall and the Natural History Museum). In fact it was said that the roads leading west out of  London were lined with nurseries and gardens all the way to Heathrow, and you know what's there now!
Allotment holders are tenants with no security of tenure. Even those on the old Manor Gardens Allotments, given in perpetuity by the owner Rt. Hon. Major Villiers 100 years ago could not resist the power of the Olympic Park Authority when it was wanted for the games.
It's all progress of course, but with the need to house people there should surely be a need to provide land for tilling and relaxing, taking time out from the routine of life and appreciate that our food need not come from another continent but from our own hands. It is somehow ironic that the week Barnett Wood Lane Poor Allotments has learned its fate, Leatherhead has announced it is to open its first Food Bank.
Posted by Dick Woodman at 21:09 No comments: 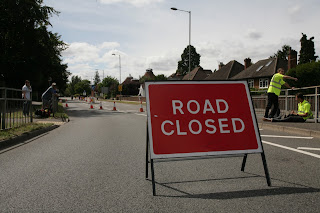 Or so the letters page of our esteemed local newspaper would have us believe. Today the RideLondon 100 charity and London-Surrey Classic race takes place and just as when the Olympic cycle race came through Dorking last year a number of roads have been closed to traffic. It is such a shame that people should see it as an attack on their personal freedom with emotive remarks like 'inprisond' and 'kettled in our own homes', but then drivers have had a pathological hatred of cyclists for years. One often quoted remark is 'they do not pay any road tax' but then again neither do the motorists. They pay a Vehicle Tax, and the link between that and road maintenance ended way back in the late 1930's. It is instead the responsibility tax payers at National level and local tax payers at County level, so everyone pays in one way or another.
20,000 riders will be coming through Dorking, some rather faster than others, but 100 miles is not to be taken lightly, as I know. Many years ago I liked to cycle on a lovely touring bike called a Raliegh Royal, mainly on Sunday mornings around the Surrey Hills, with rides up to 60 miles. The longest trip I ever did was to Dymchurch, and at 75 miles, it was about 6 too long. Ah well the scenery was nice even if my knee thought otherwise. The significance is that 20,000 people will be able to enjoy Surrey without the fear of being run off the road, and it doesn't end there as yesterday 8 miles of road in central London was closed to traffic (which has a horrendously high death rate among cyclists) and an estimated 50,000 enjoyed a stress free ride around London's landmarks.
Boris Johnson may appear to be a buffoon (he does actually ruffle his hair before going on camera) but what he is doing for cyclists gets a thumbs up from me at least. As for me, well now days it more sedate on a mountain bike pulling my Veelar trailer full of tools to the allotment, keeping off the road as far as possible.
As the cyclists leave Dorking they will pass its most iconic landmark, The Dorking Cockerel. We have had it on the roundabout that is the crossing point of the A25 and A24 for six years now and was its self the subject of many complaints from the 'town that likes to say no' as a waste of public money. It was in fact financed by the civic development fund from nearby flats and public subscription (the reception after the unveiling was very nice). The 'Dorking' chicken is said to have been introduced by the Romans and is distinctive by having five toes and being good for both eggs and the table, it was widely farmed in the area but now only bred by enthusiasts. Our neighbour kept a few until the fox called, but that cockerel was a thing to be reckoned with.
The statue is now a well established, and dare I say loved, feature in the town attracting the attention of Dorking's guerilla knitters who adorn it on special days through out the year, the last one was to celebrate the birth of Prince George with a pair of blue booties. Even the Council has stopped warning them of their mischievous misdeeds, so maybe there is hope for Dorking and with luck the RideLondon event will continue for years to come.
Posted by Dick Woodman at 19:30 4 comments: