I wish! Nature it is said usually compensates, but this is damned ridiculous. After last years abundance of rain we now have clear blue skies with not a drop of the wet stuff in sight. The chalky clay of our allotment has done its 'thing' and turned from the sticky mud of winter to rock hard, with cracks. Not that we are short of water by any means as sweet clear mains water is piped to the allotment courtesy of the council for which we are charged accordingly the following year. 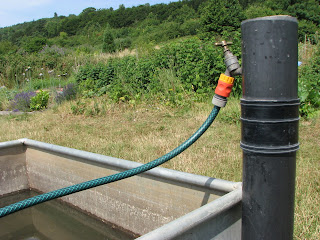 The water is piped to four stand pipes set equidistant across the allotment and each stand pipe has a large water tank to dunk our water cans in. It is convenient and so far I've not found it tiring, using two 10ltr cans to keep me balanced I find watering my 10 rods takes less than an hour. The problem is that the pipe supplying the water is too small, so if all taps are ON the pressure drops for each tap in the line, and the last one barely gets a trickle coming out. So it very much relies  on ensuring that the tanks are kept full.
Now just suppose that someone wants to use a hose! or even two!! With 4 stand pipes and 75 plots this can, and does, restrict the amount of water available for the rest. Woe betide if another turns on a tap to fill the tank as the huffy sprayer bares down on them demanding 'fair shares for all'. This has happened as I scrapped the bottom of two tanks and having finished, left the site, the sprayer still hard at it, as they were when I arrived. 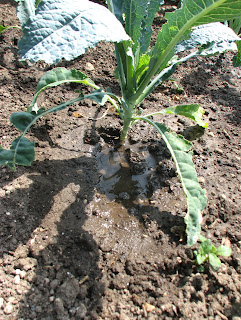 I have never understood why when you are growing vegetables you would also want to water the weeds, the path, the grass, the sky. The last bits not true, but maybe the process is so mesmerising that they sort of reach a state of Zen, an inner place to contemplate the world and its mysteries. When on the other hand delivering the water to the plant you want to grow makes so much more sense. Ah, ever the pragmatist. Such a dull boy.
The funny thing is that a sprayer never connects cause and effect. If the tank is empty because they can not be filled owing to the hose being on the tap it is therefore not their fault that the tank is empty as they have been using the hose and not the water can. What a long sentence! makes me breathless just reading it. I have lately been reading a book by Roy Lacy of his time on the Cowpasture (that's the books name) allotments just outside Felixstowe. The average annual rainfall in East Anglia is a miserly 20.5'' and they had no water on site at all! Makes you think doesn't it.
The weatherman, or should that be person? informs us that the jet stream has shifted to the south and thunderstorms are due. That's not to say we in the S.E. will get any but it would sure be appreciated.
Posted by Dick Woodman at 20:21 No comments:

Dorking gets a pumpkin patch

No not the town because as we all know Dorking likes to say NO, it's like a default setting here. I really mean the Dorking Allotment Holders Association, hereafter, for ever, referred to as DAHA.
DAHA is a friendly group interested in providing help and advice to allotment holders as well as organising events and representing their interests with the landowners, the local council. Of the 289 plots on five sites only about a third are members, the rest seem to think that at £3 per annum it is too much or poor value. It's the culture of 'what do I get out of it'. It reminds me of that great speech John F Kennedy made 'ask not what your country can do for you - ask what you can do for your country'. They don't make Presidents like that anymore, no wonder they killed him. Americans seem to like their Presidents to be either tricky, have dementia or be unable to find the 'on' switch on a Segway or the way out of a room. I seem to be wandering here so lets get back to the subject.
For the last five years DAHA has put on a Pumpkin Show in Dorking, and very popular it has become too. The venue gets a display of pumpkins, squashes and gourds outside to pull the punters in (it's all free, by the way) which have been donated by Tozers the seed company based in Cobham www.tozerseed.com. but sadly because of the appalling weather conditions last year they could not help this year, so what to do led to a discussion between Chris Dale, Chairman of DAHA, and Alaster Calder, Dorking's very own pumpkin guru and inspiration behind the show. They decide to approach Mole Valley District Council to see if there were any suitable areas within Dorking they could grow the shows display.
A meeting with Jack Straw, planning policy manager, identified an unused section of the Ashcombe School site that could be used, and so it was on to the schools Head Master, David Blow, and community governor, Phil May, to get permission. They were supportive providing there were no objections from surrounding residents (see first line). Anybody would think DAHA intended to drill for oil but after promising to get on site from the most awkward point imaginable and staying well away from back garden fences there was an agreement and a one year lease was signed with Surrey County Council.
Now the fun started and a call went out for volunteers to clear 3ft high couch grass off an area for sixty or so pumpkins. The usual suspects (or mugs) turned up and jolly hard work it was too, especially digging through the mat of rhizomes and rubble to plant them in. The thought that we're getting too old for this and many hands make light work was like the wind whispering in the poplars, but the few conquered all and the job was done. No need for horlicks tonight.
The seed for the pumpkins came from two sources, Baker Creek Heirloom Seed Co. www.rareseeds.com and The Real Seed Catalogue www.realseed.co.uk. They have great names like Blue Banana, Honey Boat Delicata, Freaky Tom and my personal favourite Red Warty Thing, but as Sods law always prevails in such matters they were planted at the start of an unprecedented heat wave for little ole England with temperatures  hitting 32C and no end in sight. Of course there's no water on site so it has to be lugged to the 'most awkward point imaginable' and that has fallen to poor old Chris who has the key. If they get away as mine have done on plot 59 then the display will be as good as any at this years pumpkin show. 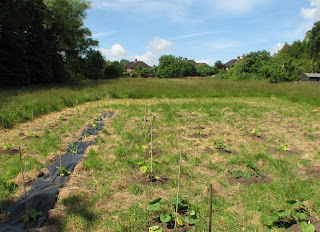 Posted by Dick Woodman at 19:14 No comments: