Oh to be in England now spring is here

This misquoted line is from Robert Browning's poem 'Home thoughts from Abroad'. It should read 'Oh to be in England now that Aprils there' but in mitigation he does mention May further on.
Well it is now official. Spring has been the coldest for more than 50 years, and not only that it followed a Winter that was also the coldest for 50 years. A combination of circumstance that has made for a very long 9 months, and tomorrow is the first day of summer. I am underwhelmed.
Not that May was a total disaster because I can remember at least occasions the sun shone and it was even hot. It was though unusual enough for me to grab the camera and take some pictures of the garden. I'll leave you with these:-

If you are like me then somewhere in the back of the cupboard will be a box of seed packets labelled good intentions. Just what it is about those colourful sachets of promise I'm not sure but then who can resist a pretty picture, or as Monty Don once said ' seed packets are like book covers, we browse through them and buy on a whim'. Last year I had a clear out and started afresh, this year, with an order for 33  different packets from Kings Seeds (who on earth has the room to grow that many vegetables) and they are still being added to. The temptation is awful as there are six major seed companies all sending colourful brochures to me as well as a plethora of small ones offering unusual or heritage seeds. Just how many there are in the U.K I do not know but a trawl of the Internet found a U.S site listing no fewer than 63.
The first illustrated seed catalogue was published in 1730 so I guess there has always been keen gardeners about, and in 1904 one catalogue listed on fewer than 170 different peas, 145 cabbage, 74 onion and 58 beet, but then it was the heyday of kitchen gardens. I suspect many were similar or even the same in the way we may call it kale or turnip here and borecole and rutabaga elsewhere.
I got to thinking about all this because, just at the minute, I'm finding  germination rates a little erratic. It seems sometimes I need to sow twice what I need to get half what I want. Now there can be many reasons for that, it can be too wet or too dry, or too cold, today's temperature for instance would be normal for late January. But it can also be that the seed is not viable. Way back 1852 the Gardeners Journal accused seed merchants of mixing dead seed with live and in 1866 an RHS committee reported that seed was adulterated, stored too long, dyed and oiled to look good and in trials, germination rates were as low as 28/100.
Thank goodness for trading standards and the EU,or not if you're looking for heritage seed. Their pig headed insistence on uniformity has meant that only approved strains can be sold legally. This was a big problem for the Heligan Project when it came to restoring the kitchen garden and growing the sort of vegetables grown before the First World War took all its young men to an early grave in Flanders. Fortunately men with more commonsense that the common market got round the problem by saving heritage varieties and giving the seed through various associations and societies such as the HDRA at Royton. As Tim Smit says in the forward to The Heligan Vegetable Bible 'It is ironic that a productive tradition began on the large estates should have been dependent in large part on allotment holders for its presavation'.
So what of the seed we buy. It may not be a surprise to learn that our climate in the UK today is not exactly conducive to seed production. According to Kings Seeds a three acre field of sweet peas in a good year will produce 1.5 tons of seed but in 2002 that entire crop was lost. Now most of the seed they sell is grown in either southern Europe or South America, and I guess that must the same for the others. At Kings each batch from abroad is tested  for germination and purity in their laboratory and given a number, that number then stays with it to the point of sale.
On balance the failure of any of my seed to germinate is down to me, but Oh! the magic when it does. I'll leave you with this thought from the garden writer Anna Pavord, 'seed sowing is an essential rite of passage for the gardener'.
Posted by Dick Woodman at 19:30 2 comments:

Suddenly one morning you wake up, pull back the curtains and can not believe what you see. Instead of winter dread there is instead stunningly clear blue sky and grass so green it dazzles the eye the same way the petals of celandine seem to reflect pure sunshine. Somehow despite my best efforts it always comes as a surprise (rather like Christmas always came as a surprise to Royal Mail (a story for another time)). and despite it being early days mild panic sets in. Am I ready? But first I would like to take you back to last year.
On the 11th October 2012 I signed the tenancy agreement on a second plot at the Ranmore Allotments (plot 75). Now this is no big deal as they are all 5 rods so another just gives me the same as a standard plot elsewhere. Its just that at the last AGM of the the Dorking Allotment Holders Association, or DAHA for short, one crusty old allotmenteer happened to say 'half a plot, not worth the bother' and I happened to agree with him. The only trouble now seemed to be just how was I going to turn 150 square yards of waist high weeds into growing space ready for the spring in the appalling wet Autumn of that year. I had already decided that this new plot was to be the fruit in 'fruit and veg' and I even had a plan. This might seem obvious but plot 59 was conceived without one, the lack of which became obvious as that first growing season progressed. It now follows a traditional pattern and is so much easier.
﻿﻿﻿﻿﻿﻿﻿﻿﻿ 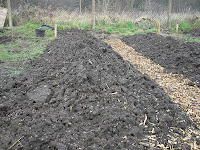 Fruit can be in the ground for 10 years or more so each bed needed double digging not only to ensure fertility but also to remove all weeds, as far as that is possible! Once the beds were marked out at 1.2m wide running north/south with access all round of at least 70cm (some beds were doubled with a 40cm path between) the surface was scalped and the turfs stacked upside down to compost for future use. Now the slow laborious task of digging began to remove the roots of perennial weeds (bags of them) which was made even harder in the rain. That's when I realised I'm not getting any younger, or my back did, and that old saying ' what a gardener needs is an iron back with a hinge in it' came to mind. The solution came by fitting a long handle to my digging spade, which must seem obvious to anyone living outside of the UK, but here in old blighty they are just not seen. Less bending and more leverage spurred me on to finish all the digging by March. 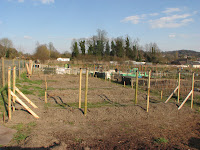 Frames were erected for the raspberries (Autumn Bliss) and blackberries (Merton Thornless) and bare rooted currant (Versailles/Red Lake/Wellington/Ben Conon) and gooseberry (Invicta/Careless/Hinnomaki Red) bushes. Rhubarb crowns (not technically a fruit but used as one) of unknown variety because they came from other plots, went in at the very end, and pumpkin bed along the fence line got ready. This was as acknowledgement to the previous occupant, Alister, who is Dorkin's 'Pumpkin Guru' and organiser of the the towns annual pumpkin show. Worth a story of his own! There will also be strawberries but as they are best planted in the autumn they can wait. 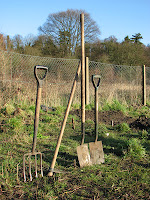 What will need dealing with are the paths which I did not dig and still contain all the nasties that are a problem on any allotment site, sow thistle, dandelion, lesser columbine and couch grass to name but a few. I reckon to dig those over during the summer but as they also contain bluebells and cuckoos pint I will try to be selective, finally, is what to do about the rabbits. They mostly stay the other side of the fence, in the community orchard (part of Transition Dorking) but during the double part of my digging I kept finding their burrows and on one occasion the fork almost disappeared into a chamber that must have been used for nesting. The bucket loads of stone that went into the holes may hinder them but I doubt will stop them and as much as I'm partial to a rabbit pie I would sooner they were not getting fat eating what I've planted.

Well, am I ready? Yes I am. Seedlings are emerging before my eyes and some have been planted out already with more sowings to ensure succession. Everything is looking good with fewer pests due to the cold winter and the prospect of a bumper year to make up for last years failures.

Posted by Dick Woodman at 16:09 No comments: